The Disaster that is Art, Part II

In my last Disastrous Art post, I explored the reasons why artists, musicians, actors, writers and craftspeople in North America are forced to choose between their art and survival. In this post, I wish to examine the very idea of art itself and how Art is deepening the divide between itself and its audience. I am not talking about the generous, broad definition of art which can be defined as "human expression". I'm also not talking about indigenous art that collectors fawn over because they want to make themselves look worldly. I'm talking about Art.

It goes by many names. Fine art, high art, literature, art-music, classical music, or just Art with a capital "A". It is difficult to define, but some people define it by what it isn't. It isn't pop-art. It isn't genre-fiction. It isn't popular music. That would be fine, except "pop-art," "genre-fiction," and "popular music" are all terms equally difficult to define. At best, Art can be defined as human expression which is "better" than others.

Why is this definition important? Because many institutions place high value on Art. For example, within my own experience, Grain Magazine publishes "engaging, surprising, eclectic, and challenging writing and art" according to their website, which is code for "we're not looking for genre-fiction". The Saskatoon Symphony differentiates between its main concerts in which it plays "classical" music from established masters and new Canadian composers, and its "Pop Series", in which it plays film music by John Williams and ABBA. When I applied for arts funding from the Saskatchewan government, I was advised that if my project was "popular" in nature, I should apply to the extra-governmental Saskfilm for funding.

I see Art-exaltation in people around me, particularly those with a university education in an artistic field. People who work in artistic fields have much of their self-esteem tied into Art, and many feel that they are better than other artists because they practice true Art instead of vulgar entertainment and commercialism. I too have a Bachelor of Arts degree and for a long time I believed in Art. I believed that some art was better than others, that some human expression should be written-off as "entertainment". It was the cause of much snobbery, haughtiness and pooh-poohing on my part. However, since I graduated I have been tormented with the suspicion, then the conviction, that the concept of Art is total bullshit. 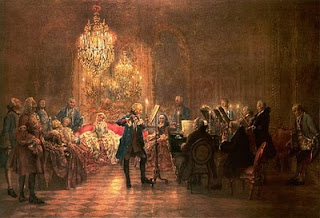 I believe that Art is a holdover from less democratic times. Hundreds of years ago, nobles needed a way to make their form of entertainment seem superior to the entertainment of their smelly, toothless subjects. As a noble, the myth of superior breeding had to be upheld. Not only was a noble born better than his subjects, everything he did and appreciated was better. This was essential to his survival, because appearing unworthy of leadership could lead to his head on a pike. Thus was born the concept of entertainment that was better, smarter and elevating. With the growth of the middle-class in the 19th Century, the new moneyed class desired to imitate the nobles. So they bore the noble concept of Art, showing themselves to be cleverer and more refined than those who had less money. While the nobles and their courts have vanished, the concept of Art has lingered among the wealthy, intellectuals and professionals. In our society, it is permissible for people well-versed in Art to hold themselves in superiority over people who do not.

I have said that people believe Art is "better". So what does "better" mean? Firstly, it means a higher degree of skill on the part of the artist. Skill comes with hours of practice at the art form, to a point where technical mastery is achieved. I have no objection to this, although it's worth noting that technical mastery does not equal art. A potter can create a functional plate with mastery, but it does not become art until he uses the medium for expression with glaze and decoration.

Secondly, in the past, Art was distinct because it sought to "elevate" the audience. Elevation is the result of "the sublime", a strange concept based in grandeur, bigness, beauty and proximity to God. An elevated individual is brought into the throes of ecstasy by the Art in question. However, with the decline of religion in Western Society, so has the idea of the sublime fallen. Now, many would submit, Art is achieved by breaking boundaries and expectations. Art must be new, intellectually stimulating and challenging.

Lastly, and most importantly, Art is only for certain people. Many people mask this intent by saying that Art should not be "commercial" or "out to make money". However, what they mean is that Art should not appeal to the vulgar masses. How else does one make lots of money, but by appealing to lots of people? The intended audience of Art must be connoisseurs of art: other artists, intellectuals, scholars, critics and collectors.

So, Art is masterful, challenging human expression that is meant for smart people. Well, my friends, there is no imperial scale that judges the skill of an artist, nor the intellectual value, nor the IQ of the intended audience. That means that Art is subjective. SUBJECTIVE. Because it is subjective, "Art" is a completely useless term with which to judge human expression.

Everybody has varying levels of different types of intelligence and different amounts of experience with entertainment. One man's Art is, to others, either vulgar or incomprehensible. To some, a Fellini film is Art, while most Americans wouldn't understand it. For others, Fellini is vulgar merely because he is a filmmaker. 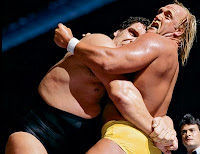 Another example: when I was ten years old, I watched the legendary wrestling match between Hulk Hogan and Andre the Giant. Professional Wrestling is a form of entertainment of the most vulgar kind. No Art could possibly result from such spectacle. But there they were, two men feigning rage, pain and exaltation. Kinda like actors. There they were, using their bodies to express emotion. Kinda like dancers. When Hulk Hogan triumphed and held the title belt above his head, exhausted and elated, my ten-year-old mind was moved. I felt the ecstacy of victory, the thrill of hard-won triumph. I had never seen anything like it before and my developing mind was touched with the sublime. Yes, I was just a dumb kid. But to me, a WWF match was elevating. At the same age, I would have found a Mozart symphony boring.

What I am trying to say is that it is incorrect to declare any entertainment as "better" than another. Art and entertainment are the same thing. Each individual has opinions and a less harmful way of expressing them is to say "I like this" or "I don't like this".

Harmful? Yes. I say this to all who are reading who believe that Art is better than entertainment and have their egos wrapped in this fallacy: others can detect it. They see that because you know your Art, you think you are better than them on some level. It leeks through your personality and effects your behaviour. It makes people feel small. It makes them hate you. It perpetuates the view that artists are snobby and self-absorbed. It is one of the reasons why Stephen Harper declared that ordinary Canadians don't care about art.

I normally wouldn't mind that people believe in the existence of Art. It is, after all, only an opinion. However, from what I've experienced, art snobs populate high places: universities, arts funding boards, galleries, newspapers, scholarship committees, and friends-of societies. They pass judgment on other people's projects, using the bullshit-definition of Art as a standard. They indoctrinate young artists with a belief that is false and offensive. While film has just started to become recognized as an Art form, film composers are still ostracized by their peers. Sequential art and Video Games are ignored or mocked.

A gaping crevasse yawns between high-artists and the rest of the world. Ordinary folks resent artists for their snobbery and artists resent the hordes of philistines who marginalize them. This is unbelievable. Isn't art supposed to be about communication and expression? Shouldn't people trained to communicate be the best-understood people on the planet?

Artists, we must take the first step, because the rest of the world won't. We must get off our high-horses and stop being so damned smug about ourselves. We have to recognize that our worldview is not the only correct one. We have to respect the tastes of others and not take it personally if they would rather watch CSI. Lastly, and most importantly, we must remember that there are six billion people out there hungering to be entertained; if we can do that, they will love us.