Number 60 on AFI's list is Duck Soup, a 1933 Marx Brothers political satire.  The action takes place in the fictional country Freedonia, where wealthy plutocrat Ms. Teasdale orders that Rufus T. Firefly, become leader of the country.  Firefly, played by Groucho, proceeds to act like an asshole.  Meanwhile, the leader of neighboring Sylvania hires a couple other Marx Brothers to spy on Firefly.  They too proceed to act like assholes. 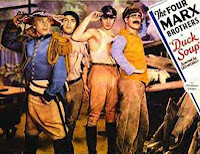 Frankly, I have difficulty seeing how this movie is a political satire.  To me, it seems more of a series of set pieces engineered to feature the brothers Marx acting like assholes.  This isn't to say the movie is bad, I just think it's a little weak in the satire department.  That's also not to say the assholic antics of the Marx Brothers aren't funny, either.  When they act like assholes, they do so not because they're mean or angry.  Their characters have no motivation other than to cause chaos for its own sake.

What this film has going for it is a series of quick-firing gags and physical comedy.  Amongst these is the oft-imitated mirror gag in which Harpo seemlessly pretends to be Groucho's reflection in a mirror.  What it lacks is a strong plot and, well, political satire.  All in all, I've seen way funnier comedies and many more political satires that are funny because they're true.
2 1/2 leg-lifts out of 5
Posted by Cheruby at 11:05 AM