When I was in Grade 11, I drew a picture of Robert E. Lee in pencil. The photo copied is a perfect capture of the man’s eyes, of their mixture of stern command and sadness. I drew this picture because I admired him. I hung it in my highschool locker. 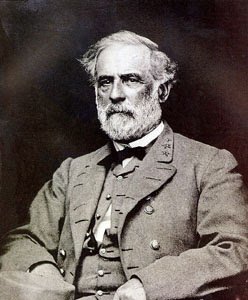 Twenty-five years later, a group of white men, also admirers of Lee, gathered in Charlottesville, Virginia to protest the removal of his statue from the newly-named Emancipation Park. They clashed with counter-protesters, and one of them drove his car into a crowd, murdering a 32-year-old mother. At a press conference, The President spluttered some words in Lee’s defense, asking reporters if they also wished to pull down statues of other slave-owners like George Washington and Thomas Jefferson.
In his lifetime, Lee was a central figure of The United States’ Civil War, and his story is one of heroic contradictions. He was a soldier who abhorred violence, and totally obedient until he betrayed his country. He was a racist slave-owner who disliked slavery. He commanded the Confederate Army in its most glorious victories and ignominious failures. For Northerners, he was both traitor and honored adversary.
His legend began in The Civil War, but it has been rewritten many times since. After the war, he joined the American pantheon of heroes. Politicians used him as a symbol of reconciliation between North and South, a hero to salve the wounded pride and sorrow of a defeated South. He became an avatar of the Lost Cause, a narrative of the Civil War that highlights noble soldiers defending their homes and State’s Rights, while downplaying or ignoring slavery. In many ways, Lee is The Lost Cause, a noble soldier who fought for his homeland, while disliking slavery and secession.
Lee has also become an icon for intolerance. Former Confederate soldiers, such as Nathan Bedford Forrest, formed the Ku Klux Klan to thwart The Reconstruction and punish newly-freed slaves. Their numbers swelled in the 1920s and 30s. They were joined by Neo-Nazis and other white supremacists in Charlottesville. To them, Lee is a hero of the white race, who battled a tide of uppity niggers, race-traitors and weaklings.
A new Lee narrative is circulating. You can find it easily by Googling “Who was Robert E. Lee”, and finding one of the many copy-paste articles about his history. It casts Lee as a cruel slaver. Here, he is a blunderer who just couldn’t figure out them gol-dern military tactics, his greatest victories credited to the even-greater incompetence of his rival, George McClellan. It goes out of its way to point out that Lee wouldn’t have wanted monuments of himself. Its sole aim is to justify the removal of statues.
All over the South, Confederate statues are being removed, including images of Lee in Charlottesville, New Orleans, and Baltimore. To the architects of this movement, Lee is a symbol of the violent racism that caused the Civil War, and endures today. The public statues of Lee, mounted on Traveller, are a reminder of the humiliation and suffering of slavery, and the enduring institutional racism that came after.
None of the narratives about Lee is completely true. Too many stories claim him. Only Lee knew the full narrative of Lee, but we can come close to discovering his true character by studying history.
If you take the time to read many different accounts, you will see a creature of perfect physical and moral discipline, tortured by his own deficiencies. You will meet a truly gentle person who was also a killer. You will see a man unlearning outdated military tactics, and quietly mourning thousands of deaths he caused. You see him take responsibility for failure, and his soft-spoken humility. You must reconcile a man of such heroic character fighting on the wrong side of history, for an immoral government founded by proud and greedy men. You will come to learn the pain behind those stern, sad eyes.
In 1861, Lee was forced to make a terrible choice. He could either command the Union Army, or return home to fight for his native Virginia. His choice was personally heartrending. And yet, Lee’s personal pain at his decision to fight for the Confederacy caused far more external pain. It filled thousands of surgeons’ buckets with sawed-off limbs. It crowded thousands of graveyards. Would the Confederacy have lasted long without his talents?
The pain did not end after Lee’s surrender at Appomattox. It spoke through generations, inspiring some, and inciting others to violence. Rip down all the statues of Jefferson Davis, Alexander Stephens, Roger Taney, Braxton Bragg, or the rest of those Confederate losers, and it will elicit hardly a peep from the public. Target Lee, and it’s a different story. It is no coincidence that the violence of August 12th was fought over his statue. One hundred and fifty years after the Civil War ended, people are still dying because of Robert E. Lee.
In Grade 11, I made a monument to Lee in my locker. Knowing what I do now, would I keep that pencil drawing on display? That’s a tough one. When I drew that picture, I didn’t give a thought to slavery. I admired Lee’s self-control and self-denial, his cunning in battle, and his resolve in overwhelming adversity. But, if I could explain to myself that other people might think it an endorsement of slavery, or that I was a Klansman, I would be embarrassed. I’d be defensive, then guilty. Then I’d probably take it down. The process would be painful.

“What a cruel thing is war; to separate and destroy families and friends, and mar the purest joys and happiness God has granted us in this world; to fill our hearts with hatred instead of love for our neighbours, and to devastate the fair face of this beautiful world!” ~ Robert E. Lee
Posted by Cheruby at 1:29 PM