To those reading my blog who haven't heard otherwise, my wife and I are moving from Saskatoon. The house is sold and we're moved out, but we're awaiting the possession date of a place in Harris, SK, a town 45 minutes southwest of Saskatoon. That leaves us homeless for a month.

Moving is always a time of mixed feelings for me. For the last twenty years, with minor blips never more than five months long, Saskatoon has been my home...

...and a cat just dropped out the window. I'm house-sitting and this second-story window doesn't have a screen. Francis the kitten decided to test the theory that cats can't fly. The sound I heard went scrape-scrape-scrape-plop. Poor kitty! Don't worry, Francis seems fine. Just scared shitless and now in hiding. We now return to our scheduled programming... 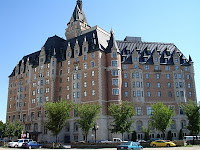 ... Okay. Saskatoon. My hometown. From what I can tell, it's a town without an identity. It's Saskatchewan's largest, but has little personality. It's pretty but not a hub of culture. It boasts only one landmark building, the Bessborough Hotel, a castle-like structure where I was married this fall, but that's it. I was amused to hear a small-town lady I met yesterday refer Saskatoon as "a big place" when most of the world's residents would probably think it unremarkable or small.

When I first moved here in 1989, Saskatchewan was in serious decline. The Devine and Mulroney governments were in the process of bankrupting us. When they were voted out, drought hit and didn't let up for a decade. In an agriculture-based economy, that sucks. People were leaving the province by the hundreds every month. Saskatoon's population stayed steady as established residents fled the city to Calgary, Vancouver and Toronto while people from rural areas took their place. Jobs seemed very scarce, and while the city was still pretty with its river valley and elm-lined streets, it still felt like Saskatoon had nothing going for it.

Then a few years ago, that changed suddenly. In the space of half a year the prices of houses doubled. People started moving here from abroad. In my travels about Canada, Saskatoon seemed to be the name on everybody's lips as "that place I'm thinking of moving to".

The funny thing is I'm not sure why this has happened. No gigantic factories have, to my knowledge, opened their doors (in fact the big Mitchell's slaughterhouse closed). There was no winter Olympics. There was no great cultural revolution that attracted the intellectuals of the world. With the exception of some boring suburban neighborhoods on the edge of town, it's just dumb-ol' Saskatoon but with more traffic problems. Oh, I guess the University now has a psychlo-tron... psycho... synchno... a scientific thingy that nobody is sure what it does.

I'm not going to complain. If it wasn't for the boom, Suzi and I would not be able to buy our home in the country with cash and we would still have mortgage payments. I'm not even going to say that I miss the old, quiet Saskatoon: it kinda sucked. What I will say is that with Saskatoon growing, civic leaders now have to think hard about what this town is becoming.

From what I've seen, Saskatoon's planners have a serious case of Calgary-envy. Take, for example, the Weir. It's a depression-era irrigation project which was designed to raise water levels, but since the South Saskatchewan was dammed upriver, it's main use is to look pretty and occasionally remove stupid people from the gene pool. Calgary had a weir on the Bow and recently removed it. So naturally our wannabe oil-baron, six-gun-shootin', cattle-rustlin', Olympics hostin' city council wants to get rid of ours. Why? "It's dangerous and stuff! Won't somebody think about the CHILDREN???" Honestly, more people have been killed over the years on 8th Street in traffic accidents, but we're in no hurry to put it to the jackhammer.

Anyway, that's just a tiny part of the we-wish-we-was-Calgary bullshit that goes on here. In my mind the most troubling way Saskatoon is developing is the way it is developing outwards. The new neighborhoods are following a pattern seen everywhere else in North America, not just Calgary: twisty streets that confound travelers and ambulance drivers, laden with shitboard houses cobbled from environmentally unsound materials. Beyond these are the estates of the rich: huge mansions that leak energy onto the windswept prairie, sitting on bald lawns that the owners never use which would be growing wheat in other circumstances, disgorging Hummers and trucks from multi-car garages for the single-occupant drive to work every morning. 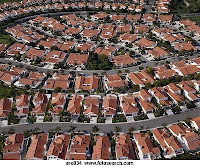 All civic planners know this is a problem. With such low-density housing, mass transit, which is already a joke in Saskatoon, will remain a joke. If the city continues to grow in such a fashion, it will become Calgary: crappy, traffic-jammed, 1-hour-commute Calgary. (As a side note, there are still many areas in town, especially the industrial ones, that you cannot reach by bicycle unless you put your life in jeopardy) Why is nobody doing anything about this? Why is nobody showing any sort of foresight in my town when they see what is happening in almost every city in North America?

I once read a great book called "How Cities Work" by Alex Marshall that had a section on Portland, Oregon. Most cities that have excellent mass transit systems like New York or Vancouver got lucky by having their cores crammed onto little juts of land surrounded by ocean. In their developing days, these cities grew upward instead of outward because growing out wasn't much of an option. Portland, at least at the time of the book's writing, had recognized the problem of Suburban sprawl. City planners discouraged expanding the city limits and encouraged high-density residential areas. As a result, mass-transit became easy and profitable. The city got greener and easier to navigate than, say, Calgary.

That's a pretty hard one to swallow for many people. I myself prefer the ideal of the one-family home with the backyard and barbeque and all that, but I'm not so sure that's the best thing for the health of the city or indeed the world. What with the world population expanding and agricultural land getting more scarce, maybe it's not the best idea to be barfing out low-density homes onto prime cropland. On the plus side, if we decide we need the farmland back, all those shitboard houses should be really easy to demolish. Or we can just continue saying, "It's not my problem" until we run out of oil and food.

Speaking of which, and here's the really funny part, It's not my problem! Bye-bye, Saskatoon! In about three weeks time I'll be living in a single-family dwelling in Harris with a huge yard in which to hold family barbeques! Ha! Isn't the hypocrisy just delicious? At least I don't own an SUV or a mansion yet and I'll be using my yard to grow vegetables. But it does make me wonder how far down the consumerist rathole I'll slide during my lifetime. Perhaps during the next decade I'll be thinking about how much room my kids' hockey equipment takes in the backseat and considering a new Hummer H7.

As a post-script, my friend Max has a company to build environmentally-friendly homes. If you're tired of energy-bleeding shitboard homes and have some land, you should consider letting him make you a home out of rammed earth or straw bales. It's truly a noble undertaking and he needs willing customers. His number is (306) 260-9191.