The Necromantic States of America

The last couple of years I have been working on a speculative alternate reality which it occurs to me I have not yet discussed here. It has been called, until recently, "A History of Southron Necromancy" but I am now thinking of as "The Necromantic States of America". It seems to be very important to mention it now because one of my short stories which is set in this universe is going to be published soon. 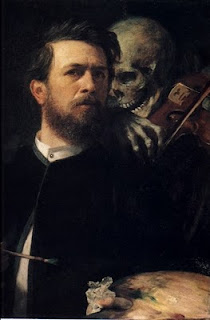 It all started one day when I was watching the news. I don't even remember what it was that I saw, but it once again started me fuming about the American South. My brothers and sisters, that place is seriously fucked. It's a land of delusion where fools command millions and ignorance is worshipped. It's a place where Christian values have been warped into a cult of greed and intolerance. I thought to myself, could The South get any more insane? At that moment I began to concieve of a way that it could.

I've had a soft spot for the American Civil War since I was a teenager. It is natural that my point of historical divergence should begin there. When I was a lad, I had a fascination with plucky underdogs so my sympathies lay with the Confederacy. I subscribed to the romantic view of The South as a land of free men invaded by a bully-nation of bankers and factory drudges, defending their homes and loved ones with chivalry and honor. I made the common mistake of believing that every Southerner was like Robert E. Lee. After a bit of historical research later in life I realized, "Holy shit. Those guys were a bunch of assholes!"

Side note: I sure am talking a lot of shit about the South, aren't I? Apologies. I could defend my viewpoint eloquently if I wished to explain my harsh words, but this post is not supposed to be about the history of Antebellum America. If you are filled with righteous zeal by my angry words, I would ask that you do a little rudimentary historical research on the years 1849-1860 and you'll see that the South had it fucking coming. Screw you Jeff Davis, Roger Taney, William Walker, Franklin Pierce, Millard Fillmore, Edmund Ruffin and John C. Calhoun!

Anyway, my history is an examination of what would have happened if the decadent slave-economy of the South had survived the Civil War. The immediate problem with such an idea is that slavery collapsed for a reason: it sucked compared to free-market capitalism. It gave great wealth to slaveholders and left poor Southerners poor. I believe the subjugation of America's blacks could never have survived into the 20th Century, that it would lead to widespread rioting and slave revolts and perhaps foreign invasion. Mechanization in the North was already beginning to outproduce slave labour by the start of the war.

The only way the slave economy could survive is if slaves were better, ie. they were cheaper, worked harder and had no will. Let's see here, what does that remind me of? ZOMBIES, THAT'S WHAT!

In 1860, an Oxford-educated and enlightened slaveholder from Mississippi named Bernard Welles begins a series of conversations with his slave Abigail. Abigail has been in the family for two generations, originally imported from Saint-Domingue. From Abigail, Welles begins to learn about African religion and Voudon, including the craft of raising the dead. After his plantation is sacked by Union marauders, he calls upon his educated friends the world over and forms the Initiates of Anubis, a society dedicated to saving the South from the invading Yankees and using the new art of necromancy to destroy the evil of slavery. After the war, necromancy becomes a state institution, indespensible in manufacturing, agriculture, the military and the home.

I rarely do anything unless I am burning with some sort of passion. For this project it is anger. I see the hypocrisy of so many Christians living in the South and other rural areas of North America. The Bible is very clear on certain matters: Thou Shalt not Kill, for instance. "It is easier for a camel to pass through the eye of a needle than for a rich man to enter the kingdom of God", sez Jesus, for another. Jesus wanted you to give up your worldly possessions and live the pure, non-violent life of an ascetic. Period.

Yet our world is crowded with pious Christians who believe that making money is a holy duty, who believe criminals ought to be killed and that God needs to be defended by taking the lives of unbelievers in other countries. There are millions of them out there right now, deluded fools who believe that attending church = heaven, that God is rewarding them with material wealth. Why? Because that's how their parents and grandparents lived.

The Southron gentleman of the Confederate States of America in 1990 lives on his plantation with his extended family and household of undead servants. His most recent servant, Natalya, trained as a housekeeper, is prized because she is white. She died in Russia and was smuggled to the Confederacy aboard a freighter on ice. Reanimated dead work his fields. The gentleman's son drives to the city every day in a pickup truck, which is built by zombies, to learn necromancy at the Society of the Black Roses. The Society is housed in a building near the airport, seaport and manufacturing zone which is surrounded by fortifications and undead soldiers to keep unemployed ruffians and revolutionaries out. Every Sunday the gentleman attends church, where the pastor reminds him that King David was a sorcerer and Jesus raised his friend Lazarus from the dead. After church he puts on a polo shirt and his extended family gathers in the compound for a barbeque. There he earnestly thanks Jesus for his bounty and they all chow down, secure in the knowledge that the Pearly Gates await them. This is his old-time religion and no power on earth can convince him otherwise. This, despite the fact that any citizen in any other country on earth recognizes that he is an unholy demon-blight upon the world who, according to his own religion, is going to hell.

Okay, I have to stop now. I just deleted a paragraph of angry jackassery about how much I loathe hypocritical Christians. Nobody needs to read that. Anyway, you get the idea, I'm sure. That is merely the inspiration behind the universe I've created. Each story deals with a different issue, particular point in Southron history or aspect of the effect of necromancy upon the world.

The publication of "Rosie's Knife" is an important first step in my writing career. If I can publish more short stories, the chances of releasing them in an anthology later is increased. What's more, my latest screenplay also occurs in The Confederate States of America in 1991. If I can create sufficient buzz around the universe, the screenplay stands a significantly greater chance of being noticed.

So brace yourselves, readers. The History of Southron Necromancy will unfold before you. (insert rebel yell here)

I assure you that this blog is not all angry rants and negative bullshit. Now I have proof: it's truly excellent news. In October, Dark Recesses Press is going to publish my short story, "Rosie's Knife".

I'm feeling good about it, generally. There's something about having one's creative work recognized by an official source that is, shall we say, amazing. I have been waiting so very long. Since 2003, when I decided that I was going to try to be a writer, I've been developing my craft, never knowing if I was cut out for this business. I've had only faith to keep working and hope to sustain me. I've faced doubt and frustration. I've faced raised eyebrows and concerned comments from people I know who wanted to help me and tried to dissuade me; it hurt the most when the ones I loved did it.

More details will follow as the publication date nears.

So, I've been submitting my short fiction to a few places recently. It's truly shocking to me how many publishers in Canada have an absolute genre-fiction ban. Many others use language on their "wants" lists that indicate a preference for "literature", whatever the fuck that means. It's hard to believe how closed-minded these supposedly-educated people can be. Because what I write always has a tinge of the supernatural, 75% of publishers aren't interested. Oh well, here's some more public money to support your failing readership so pretentious assholes can bloat like ghastly ticks engorged on bleak semi-autobiographical tripe and hormonal poetry.

Yeah, I'm pissed-off. However, I'm not one to dwell on anger. Starting now, I'm going to be more literary. Here are some writing samples from my next collection of short fiction, entitled, "Look at Me. I'm being Literary.". 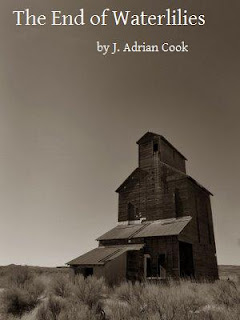 "The End of Waterlilies" by J. Adrian Cook

Heat and grass were all that was left of Anus, Saskatchewan. For seventy years the town's inhabitants had gathered at the crossroads to share sad news and attend funerals. The fire of '63 had gutted the train station, post office and general store. The owners were laid in the cemetery, their corpses blackened and crispy like burnt french-fries. After the railroad closed, the only marker of the town's existence was a stack of green post-boxes, but in 1991 these were overturned when a newlywed couple rolled their SUV. They died.

Now tall grass hid the rusty postboxes and the cemetery. It nuzzled the foundations of the town, buried it deep in warm earth. This is where I came-of-age, where I forever lost my innocence. The grass of Anus is watered with my tears.

Janie was in the backyard, skinning raccoons with her retarded brother, Bill. Her other retarded brother, Eddie, was buried nearby, killed after he rubbed a porcupine on his face. Janie's white dress was yellow with age and drenched in blood, but in that instant I knew that I loved her. As she scooped offal from a raccoon's belly, our eyes met.

"I am sexually aware," I said. "I am interested in an awkward, damaging relationship with you even though we have little in common."

"I am also discovering my sexuality," she said, "and will lovingly hold you after you have prematurely ejaculated. Also, my alcoholic father is sexually abusing me." 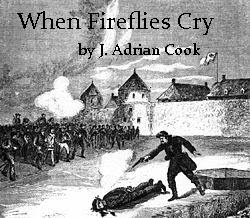 "When Fireflies Cry" by J. Adrian Cook
Elizabeth MacAdam holds her mirror and weeps. The last blow from William has shattered her incisors. They are white chips embedded in the dirt floor.

Quit yer complainin', says William, his hunting rifle on his shoulder. I'm goin' off tae join events vaguely related to the Upper-Canada rebellion. When I come back I'm really goin' tae lay a whackin' on ye. He kicks the cabin door ajar, and goose-steps out, pausing to throw a liquor bottle at her.

Her tears do not flow. They soak into her false eyes. After William knocked her real eyes out, she was forced to sew new ones out of yarn. When William saw her new eyes, he was so angry that he made her eat handfuls of nails. Now when she eats, flies crawl into the holes in her belly. Their wriggling keeps her awake at night after William has tied her up for bed.

There is a knock at the door. General Middleton marches inside, knocking some of her needlepoint off the wall. Hello, Elizabeth, he says. Just a quick reminder: you're not allowed to vote. Bye!

Truly, this time period was very difficult for women.