Review of a Clockwork Orange

Here's another Stanley Kubrick entry on AFI's list. I've seen this movie before and enjoyed it quite a lot. Since then, I've read the book and I'm afraid this viewing confirms my suspicion: the book is just better. 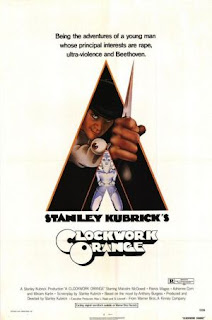 Firstly, there is the fact that this movie was based on a version of the book that was incomplete. For some reason, Anthony Burgess' New York publisher thought that Americans wouldn't get the ending. You know, the part that actually makes the book make sense. If I was an American, I'd be insulted that some New York bigshot thought I was too stupid to understand an ending where somebody decides to give up violence.

And what an ending it missed. Therein is contained a fundamental message of truth. It's about youth. Permit me to quote:

...No, it is not just being an animal so much as being like one of these malenky toys you viddy being sold in the streets, like little chellovecks made out of tin and with a spring inside and then a winding handle on the outside and you wind it up grrr grrr grrr and off it itties, like walking, O my brothers. But it itties in a straight line and bangs straight into things bang bang and it cannot help what it is doing. Being young is like being like one of these malenky machines.

My son, my son. When I had my son I would explain all that to him when he was starry enough to like understand. But then I knew he would not understand or would not want to understand at all and would do all the veshches I had done, yes perhaps even killing some poor starry forella surrounded with mewing kots and koshkas, and I would not be able to really stop him. And nor would he be able to stop his own son, brothers.

This is the message that lies at the heart of A Clockwork Orange. Apologies to Anthony Burgess, who seems to be embarassed of his novella, but I think it's brilliant and truthful writing. It's also not in the movie. 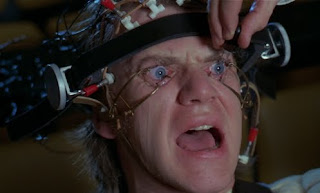 This movie misses yet another fundamental truth, not related to the ending. About mid-film, antihero Alex undergoes brainwashing that makes him feel violently ill whenever he thinks about violence or sex. However, he discovers that because Beethoven's 9th Symphony was playing during the brainwashing, listening to it makes him ill as well. Beethoven's 9th specifically.

Not so in the book. After Alex's brainwashing, all music makes him ill. What Burgess is trying to say is that music taps into violent emotions within the human psyche. It comes from the same place as violence and sex. This may seem like an odd quibble, but it's very important to me as a musician. What was the point of this cinematic change? What difference does it make other than remove an important message from the story?

All this being said, A Clockwork Orange is still a good movie of its own merit, assuming you can stomach the violence and rape. Many of the book's important messages are still tapped and the cinematograpy is fantastic. It revels in that odd feeling of dramatic tension skirting the border between comedy and terror, a tension that Kubrick does very well in his other movies, The Shining and Full Metal Jacket.

4 cracks in the gulliver out of 5

Review of "The Serpent and the Rainbow" by Wade Davis

The Serpent and the Rainbow is a non-fiction book written in 1985 by Wade Davis, a Harvard ethnobotanist. It is his account of real zombies in Haiti, the poisons that create them, the Haitian secret societies and his quest for understanding Voudon. It is fascinating, creepy, beautiful and scary. 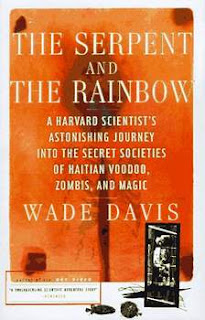 I borrowed this book from a friend's library as research material for a writing project. It is always a pleasure to pick up non-fiction that is well-written and exciting to read. Unfortunately, such styles are not "scientific-sounding", and as such seem suspect, sloppy, slipshod, and other bad things beginning with "s". From an impartial perspective, it is unfair that "interesting" and "scientific" are mutually exclusive writing styles, but what is one to do? Exhaustively listing facts is boring. To enjoy this book, you have to shut off that part of your mind that says, "Wait... give me more proof" and trust the author that he knows what he's talking about. Not being a botanist or pharmacist, I wouldn't know anyway.

If you're curious, his hypothesis about how zombies are created and maintained goes something like this: Firstly, a bokor administers a poison to a victim, the active ingredients being tetrodotoxin obtained from puffer fish mixed with venom from a toad, Bufo marinus. The poison causes the victim to enter a paralyzed, low-oxygen, yet conscious state which is often mistaken for death. After the victim is buried alive, the bokor digs up the zombie and forces them into hard labour while keeping them stoned on another poison obtained from Datura stramonium. It's a fascinating theory and apparently not all scientists agree with it, but like I said earlier, I'm not in a position to judge its merit. I can only say that it's compelling.

However, this is only part of the book. It is also an exploration of Haitian culture. Davis recounts his interactions with Voudon practitioners, peasants and the secret societies that rule outside Port-au-Prince. The creation of zombies is the ugly side of Voudon and Davis takes great pains to show the beautiful side as well. At the end of the book, the reader comes away with a wider understanding of the Voudon view of the universe, or at least as much as the Haitians allowed Davis to see.

For all its fascination, the book has a slightly unsatisfying ending. While Davis makes it clear that his book is not just about zombies, much of it is. He has a great hypothesis and all that remains is for it to be proved by first-hand evidence and testing. However, he can't go through with it. He is given offers to witness zombie ceremonies by several parties at expensive prices, but he worries that by agreeing he will initiate a ceremony that wouldn't otherwise have occurred, thus condemning some poor slob to zombiedom. Thus his hypothesis is unproven and must remain a theory. It's understandable, but boo.

So the Serpent and the Rainbow is a great read and has a pretty good theory about zombies, though sadly it cannot yet join the realms of scientific fact.
4 species of venomous puffer fish out of 5

Read more stuff at http://www.pharoahphobia.blogspot.com/
Posted by Cheruby at 1:10 PM

Email ThisBlogThis!Share to TwitterShare to FacebookShare to Pinterest
Labels: books, religion, review, Serpent and the Rainbow (the), Wade Davis, zombies

After much struggling, I have decided to create a weblog. In the past, I've attempted journals and diaries, personal and artistic. The efforts always failed because, honestly, I couldn't be bothered.

For a class in an institution, the name of which I hide for professional reasons, I was asked to keep an artistic journal. Instead, I forged one a couple days before classes ended. I assembled various pieces of paper together, used different pens and pencils and spent a couple hours making shit up about how I felt during the previous months. For the older days, I made sure to grind the pencil entries into the backs of the previous papers to make it look like they had been crammed together for months. I handed it in and felt awesome because journals are for suckers.

Why the hell would I need to blog? I'm trying to be a professional writer. Shouldn't I be writing things that I can sell instead of piddling away time and effort?

And yet here I am, and here's this blog, and I feel good about it. I've decided that I really like reviewing books, movies and TV shows. I want to share my insights. I also have opinions about other stuff, chiefly what I would do differently if I was the dictator of Canada/Earth.

So here I go again with another journal. It's not fake this time. It's 100% real, minus some stuff that I keep private. Stop by every now and then for some folksy, golden-prairie Garrison-Keillor-style witticisms, only with more swearing and unspeakable visitors from dark universes.
Posted by Cheruby at 12:58 AM