Once again, Nemesis has returned to punish my hubris. As a teenager, she haunted me. Again in University she dogged me. She is back and she will not rest until my career lies in ruins and my friends and family hate me.

Her bargain is simple. I get to play a really fun strategy game. I get to be the leader of a tribe and raise them to a world-spanning empire. I develop their technologies and tinker with their government. But in exchange for playing with the lives of millions, Nemesis destroys my free time for daring to play the role of god. The bargain is unequal yet still I slaver for the game of the bitch-goddess. And as my talents go to waste and my social life collapses, she laughs.

It says "Start", but not "End".
Her game is Sid Meier's Civilization. I first became hooked when the game was ported to the Super Nintendo. If I close my eyes I can still hear every note of the endlessly cycling modern-era music, inspiring nausea.

In 1997 I aquired Civilization II for my Mac. How many hours vanished into that void? I could not say. But when I returned to University I was playing it when I should have been studying. I must have been playing it in 1998 as well because I remember thinking to myself that I should be learning about Hinduism or practicing for the Saskatoon Symphony. Historical footnote: I got kicked out of the Symphony. Coincidence?

I managed to dodge Civilization III in 2005 on virtue of it being a stanky retread of Civ II.

But some of you may have noticed that I didn't write any blog posts this January. Eris protect me, Nemesis is back. And I'm not even playing the recently-released Civilization V. It's the old Civ IV and I'm helpless again. I am so powerless that I would rather be playing it that the latest addicto-thon for the PS3, Skyrim. 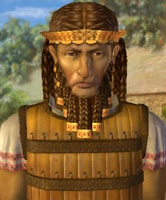 Gilgamesh sez, "Dude, your baby's crying."
I told my wife I wouldn't be playing Civ IV single-player anymore the other day. But today I came down to my office to write. "I'll just check out the Carthagenians." An hour later, I said to myself, "You're playing this game. You should stop." Two hours later, I finally managed to regain control. Thank Eris I managed to halt myself before the sun set. If I had let myself, I would have played deep into the night and woken exhausted.