Review of "Soldier of Sidon" by Gene Wolfe

Soldier of Sidon is third book in Gene Wolfe's "Soldier Series", the first two of which are Soldier of the Mist and Soldier of Arete. It is historical fiction infused with legend, told from the point of view of a Roman, Latro, who suffers from chronic amnesia and must write on a scroll of papyrus which serves as his memory. Latro is a man of ability, valued by friends, lovers and followers and favoured by gods, yet cursed to forget everything every morning. This volume follows his confused quest to regain his memory up the Nile into Nubia. 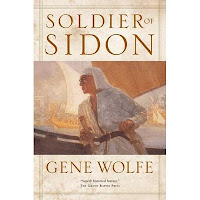 Gene Wolfe is one of those authors that few people seem to know about. He is perhaps best known for his quadrilogy "The Book of the New Sun", the first book of which I read two years ago, "The Shadow of the Torturer". Many authors, including Neil Gaiman, believe he is the BEST WRITER ALIVE. That is quite a claim and, with so many high-profile devoted fans, it is a wonder that so few have heard of him. I believe the answer lies in his very cerebral style.

Gene Wolfe is supremely devoted to viewpoint of Latro. For one thing, Soldier of Sidon does not follow classical storytelling guidelines. Latro always forgets what he was doing and where he was going, so unless his scroll or somebody else reminds him the next day, he does something else. Much energy is devoted to Latro repeatedly explaining who various characters are, their physical appearance, and his first impressions of them because he never remembers. The stories of the other characters unfold for the readers, who can make connections and understand underlying motivations where Latro cannot, creating excellent dramatic irony. There is a kinda-sorta climax, but Latro runs out of scroll before the coda is settled, and therefore the book ends on a note that could either be awesomely or awfully frustrating (see below).

Wolfe is also devoted to his setting. The ancient Nile and its mythology is researched extensively and vividly imagined. The characters seem like real people from a different time, not like modern characters slapped into a fantasy setting as is so common in historical/fantasy writing. For instance, all the characters, including the women, accept the historical societal right of men to beat their wives (even if the women don't appreciate it).

The overwhealming impression I get of this book is that it is either too good for only one reading, or I am not smart enough to truly appreciate it. Wolfe does not hold your hand and guide you through the story. You are on your own to make all of the connections and understand what is going on, and it doesn't help that the narrator's viewpoint is flawed.

My esteem of this book will swell if Gene Wolfe ever writes a sequel. The end of Latro's scroll begs for the resolution of his quest. I must say, if Wolfe plans to write a final book in the Soldier series, he had better do it fast. He's 79 at the time of this writing and had double-bypass surgery last April. Dude, don't die before you're done. Neil Gaiman and I will be so disappointed.

Just as "Shadow of the Torturer" enchanted and baffled me, so has Soldier of Sidon. However, unlike Severian, the narrator of Shadow, Latro writes plainly and without poetry, the poetry in Wolfe's writing being something I previously adored.