Book Review of "A Game of Thones" by George R. R. Martin

A continuing five-part novel series named "A Song of Fire and Ice". A board game. A trading card game. An HBO series. When a fantasy novel inspires that much attention, there must be something good about it. How is it that I hadn't read A Game of Thrones until now? Regardless, I decided to give this one a read because I love reading books and then watching the adaptation.

Thrones is set in a medieval Europe-like world. Most of the action is set on Westros, a Britain-like island complete with Scotsman-like Wildlings. Mongol-like horsemen ravage the mainland. The big differences between our two worlds is that magic and mythical creatures exist in Martin's world. Also, instead of having winter during the course of a regular year, winter arrives two or three times a generation and lasts several years (the details of how and why this happens is not explained in the first book).

The action begins at the end of a pleasant summer, but the wise are predicting a dreadful winter. Westros is saddled with the irresponsible King Robert, his conniving wife Cersei of the rich, cruel and power-hungry House Lannister, numerous debts, and a gaggle of unusually selfish counsellors. Wildlings and terrifying creatures known as "The Others" threaten the north. Across the Narrow Sea, King Robert's mortal enemies, the remnants of House Targaryen who once ruled Westros, plot to sieze his throne. Into the action is thrust the honourable Eddard Stark, whom Robert asks to become his right-hand man. Eddard and his family are tossed from their happy northern lifestyle into a cauldron of intrigue.

The result is not pretty. Martin spins complex web of characters and their histories and I don't mind telling you that the cast is thinned significantly by the end of the first book. Jugular veins are slashed, femoral arteries opened, heads roll, wounds fester, poor slobs swing from tree branches and unpleasant things are poured over people's heads. Nor does Martin pull punches when it comes to sex. Pee-pees are inserted into hoo-hoos and the results described in detail. In true medieval style, some of the hoo-hoos in question belong to girls that we in the modern age would describe as underage.

However, blood splatters and money-shots are not, I repeat, NOT the point of A Game of Thrones. The stars of this book are the beautiful characters, their rivalries, loves, fears and aspirations. Even if some of the characters don't last very long, each one is an individual with their own needs and desires. This is not a realm of cartoons, but real people. Nor are their motivations obvious. Martin leads us to what his non-POV characters are thinking instead of just telling us. Each chapter leaves the reader excitedly speculating on why characters acted as they did and what they will do next. The plot is great, I was frequently surprised and never disappointed.

I have only two complaints with the book. Firstly, Martin excessively describes people's armour. For whatever reason, near the beginning of the book, everybody we meet is wearing ringmail over boiled leather. Then, as if to make up for the amount of boiled leather described, later characters are introduced with huge chunks of text describing the damn saphhire-encrusted gold with ivy rivulets covered by a cloth-of-gold cape that makes so-and-so gasp and blah blah blah. Next, please.

Secondly, while cliches are noteably absent, when they actually appear in middle sections of the book, the effect is jarring. I had, up until this point, marvelled at the lack of cliches and to read that somebody's blood ran cold and they were chilled to the bone was very disappointing. However, only the middle sections are polluted. (I would, however, bet that with the success of A Game of Thrones and possible resulting arrogance, later volumes may be more cliche-ridden. Can anybody confirm that?)

Thrones is a work of fiction that is almost mastery. If you like intrigue, mystery and great battles, this book will expand your understanding of what makes humanity tick. Yes, it's that good. However, I would say it is not for tender readers or persons who enjoy contemplating the Baby Jesus.

Email ThisBlogThis!Share to TwitterShare to FacebookShare to Pinterest
Labels: A Song of Ice and Fire, books, Game of Thrones (a), George R. R. Martin, review

I'm going to try very hard not be trite in this post. 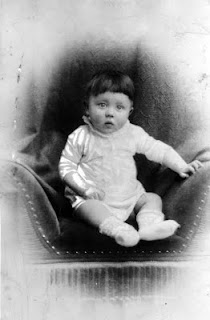 Being a parent has given me a perspective that I lacked at this time last year. A year ago, I would not have been arrested by this picture which I discovered as I surfed the internet. Scratch that. Not just been arrested, but moved to weeping.

It's a picture of a baby from over a hundred years ago. His eyes are vacant and trusting. He looks like a sweet little boy, maybe with an unfortunate haircut, but sweet nonetheless.

Here's the thing. It's Hitler. I must have been one of the only history buffs in the world who hadn't seen this image until now, and I also missed the commentary and uproar it stirred. It's a bit of a cognitive dissonance. World War II propeganda turned Hitler into a demon and history and legend have transformed him into the most evil man who ever lived. Up until this point, I had not dwelled much on Hitler's past. I had known he was a shrimpy geek who was refused service by the Austrian army but was subsequently accepted into the German army and gassed on the Western Front. I also knew he was a mediocre artist. Before that, however, I had no idea. He might as well have rocketed out of the earth with a belch of flame and sulphur and a "Mwa-hah-hah-hah-hah!"

Yet there he is. There are no horns, no blood-spatters and his eyes do not appear to be luminous red. Adolf Hitler was once a sweet little kid who didn't know anything. A year ago, I'm sure the same thoughts would have formed. What brought tears to my eyes was the fact that when I saw this picture, I was holding my own baby in my lap. In her eyes is that same vacancy and trust. When I enlarged the resolution of the picture to look at it more closely, she recognized Hitler as another baby, leaned forward and smiled.

That was what broke my heart. Hitler started at the same place my baby did. I'm reasonably certain my little girl won't become a perpetrator of genocide during her lifetime, so what happened to him to so utterly destroy his humanity? What turns a sweet little boy into a paranoid butcher of millions who needs a child or soldier to watch him sleep lest a menacing spectre only he can see wake him screaming in the night? Was he emotionally and physically abused by his parents? Did an uncle touch him? Was he mocked until he cried or beaten for being short and brown by his schoolmates? How did World War I destroy him? What spiritual toll was exacted for years of having his simple, impressionistic artwork ignored? Or was he always just irredeemably broken?

And that was that. I FELT SORRY FOR HITLER.