Review of "Julian" by Gore Vidal

For the longest time I thought Gore Vidal was this weird character-actor who always played dignified guys with excellent diction. I also knew that he had written the screenplay for "Myra Breckenridge", which appeared in a book called "The 50 Worst Movies of All Time" (Vidal has apparently disowned it). Imagine my surprise when, a few years ago, I discovered that his movie career is actually secondary, and that he is a novelist foremost. He has written an impressive number of historical novels, one of which is "Julian", the life-story of Julian the Apostate (331-363 A.D.), a Roman Philosopher-Emperor who tried to fight Christianity and revive the worship of the Hellenic gods during his short reign. 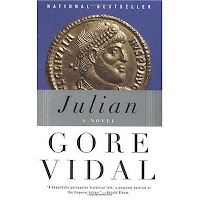 It begins with a correspondence between two philosophers, Priscus and Libanius, during the reign of Theodosius I, many years after Julian's death. Together, the two conspire to publish Julian's secret memoir. Priscus sells the memoir to Libanius with some notes. Libanius writes on the manuscript as well, seething that Priscus keeps withholding sections of the memoir and asking for more money. Thus Julian's life work is interrupted constantly by the two philosophers as they berate each other, discuss morality and offer differing accounts of the history.

"Julian", amongst other things, is a criticism of the effects of power. From the moment his uncle Constantius murders his father from paranoia, Julian is abused by the Roman state with all its bureaucracy, intrigue and fear. In his secret dreams of power, he wishes to be Emperor and do things differently. As he first tastes power as Caesar of the West, he is energetic, destroys pointless ceremony and thwarts the powerful. But as his day as Emperor dawns, despite his philosophic training and morals, he finds himself miscarrying justice and making concessions to powerful men. Corruption leaks in: where Constantius had his decadent eunuchs leeching money and resources from the state, Julian has a cadre of dubious Hellenic priests and magicians making their fortunes from his rule. Paranoia begins to haunt him, just as it did his uncle. As one reads, one begins to ask, despite obvious religious differences, if Julian's reign would have been similar to his uncle's if he had ruled longer.

More than anything, "Julian" is a lament for the vanished Hellenic world. The main characters of the novel are all pagans. As Julian follows his quest to restore the old gods, everywhere he is confronted with omens that his efforts are too late. The old classical world is vanishing, replaced by a new, ugly world. As the pagans lament the shortness of Julian's reign and the fall of old Rome, the reader is struck with further significance of which the characters are unaware: that in little over a century, Rome itself will collapse under the weight of barbarian invasions and its own corruption.

"Julian" has also been called a critique of Christianity. I'm not sure that's exactly the case. Whatever Gore Vidal's thoughts on Christianity are, and I bet they are not that friendly, the anti-Christian sentiments of this novel are the time's own. The main characters, being pagan, are hostile. The criticisms levelled at Christianity are merely echoes of Porphyry, Libanius, Julian's known published works, and other neoplatonists. Is this really criticism or is it just journalistic retelling?

Despite definitions of what "it is", the anti-Christian sentiments seem to have stirred me up. Without a doubt, this novel was the impetus for my writing "My Damn-Fool Search for Religion" post - a post that seems to have lost my blog some readership, by the way. The hypocritical, sleazy and maddening origins of the early Church are examined: the contradictions in the Bible, the corruption of the Bishops, and the exportation of pagan rituals and gods as sacraments and saints. But the book also features what has to be the stupidest religious nightmare of all time: what is the Holy Trinity Made of? For those of you who are unaware of this debate in which hundreds of thousands of human lives were lost, what do you think? Are The Father, The Son and The Holy Spirit made from the same substance or are they made from different substances, are they different people or are they made from the same substance but they're different somehow? Be careful how you answer, because 1500 years ago, your life would be in jeopardy.

So far, I haven't touched on the structure, dialogue or story of the novel. That's because, as far as I'm concerned, it's perfect. The story is thrilling. The characters are brilliant and products of their time, not 20th-Century-people slapped into an antique setting. Every detail is slavishly researched. If I ever write a book this thoughtful and excellent in every way, I would die a happy man. I give it my highest rating possible and recommend it as required reading for anybody with a brain and a thirst for knowledge.
5 arbitrary arrests out of 5

As a side note, this is something I have always wondered. For those of you who don't know what I'm talking about, here's the background. Rome was an awesome place with awesome art. Then it got divided in half between east and west. The western half fell to barbarians, beginning what is known as the Dark Ages, when art, literature and intellectual thought were in a primitive state. The eastern half of the empire lived on for 1000 years as the Byzantine Empire.

To give you an example of how crappy the Dark Ages were, let's look at some coins:

Here's a solidus of Julian the Apostate from 360, before the Dark Ages. The profile is of good quality and striking. Obviously, somebody of artistic skill crafted it. The tails side isn't so great, but you can tell what's going on. There's a guy with a captive or body held in submission.

Here's a coin of Marcian, who became Emperor in 450, ninety years after Julian. Under his reign, Rome was sacked by the Vandals, which officially marks the end of the West. The bust is looking a little more cartoonlike for sure. But what the hell is that thing on the right supposed to be? According to Wikipedia, it's Victory. Victory is looking a little shabby, kinda like Rome itself was. 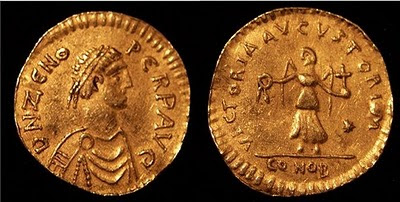 Here's Zeno, who had a reasonably long reign at the end of the 400's. Oh dear. Zeno himself looks like he was rendered by a talented six-year-old. Victory looks like a fallen angel with droopy wings. Did contemporary Romans have any sense of irony about this like we do? 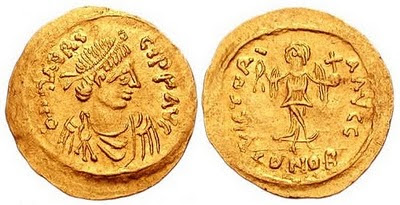 Poor Emperor Maurice and his family ended up headless and floating in the Sea of Marmara in 602. Perhaps he was beheaded by his usurper, Phocas, who saw this coin and figured Maurcie was so ugly he had to die. Victory is at her most abstract yet. Any more abstract and she would be a crayon drawing of a head with legs and feet sticking out of it.

Things were worse in the Western half of the Empire, where they stopped making coins altogether. Germans were running around whacking the heads and penises off of statues. Then they all retired to Africa and had a big laugh.

So here's my question. What was the Byzantine Empire's excuse for having sucky art? The West was overrun by barbarians. They have a good reason for entering the Dark Ages. But what was going on in the East? Constantinople was never sacked by barbarians. Why is there such a shocking and lasting decline in the quality of their craftsmanship?

If "Julian" is to be believed, the ascendancy of Christianity caused it. At the time of Libanius and Priscus, the Christians were just closing down all the Hellenic schools. There are constant references to the new style of "ugly" art. Could it really be that the Christians had their own abstract and austere style of art that they favoured over the photorealistic tradition of the Greeks? Did Christians cause the Dark Ages just as surely as rampaging Germanic tribes?

I suspect the truth is not so clear-cut. But on the other hand, maybe it is. I won't know until I spend a little more time reading the history. I have all sorts of vile anti-Christian words dripping from my fingers right now, so maybe it's best to stop this post now before I lose more readers.

Maybe I'll read a nice book about Jesus next. I have to get rid of some of this Christ-anger. Maybe I'll read Ben-Hur. Incidentally, Gore Vidal wrote the original screenplay for the 1958 movie Ben-Hur. Just goes to show you that Gore Vidal has affected our lives beyond reckoning. He might just be watching you right now...