Since fiction has existed, hordes of incompetent foes have assailed heroes. These foes are a literary device which, at first, encourages audiences to fear villains by making them seem formidable. Then the foes get blown away and the secondary literary function is achieved: the hero looks very tough indeed. When these foes appear in a visual setting, such as theatre, comics, film or video games, these foes often have their faces shrouded or hidden. It's a tradition that I'd like to examine.

The Faceless Enemy has a long history. The earliest example I can remember with any clarity is the ninja. The famous shinobi shōzoku outfit that we all know, the all-black costume with the facemask, puffy pants and two-toed shoes, was very likely never used by actual ninja. Rather, it was a symbolic stage-convention of Japanese theatre that would allow audiences to easily identify a character as a ninja. It's a cool-looking costume that sticks in the viewer's mind. No wonder that it resonated over hundreds of years in Japanese culture and was copied by North American filmmakers in the 1970's. Many heroes have donned the awesome ninja garb, but when enemies do so, they are frequently very bad at their jobs. 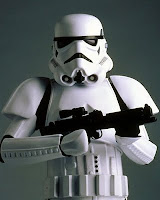 In the world of video games, you will be playing an exeptional game if you AREN'T killing Faceless Enemies. From the masked-enemies of Borderlands to the shrouded reapers of Infamous to the balaclava-terrorists of Rainbow Six: Vegas 2, they are the industry standard. The reason for this is that it's just easier to program a certain number of enemies for the player to murder and if they don't have faces, it's less likely that the player will say, "Hey, didn't I kill that guy already?"

You get it. They're everywhere. But why? What is it about Faceless Enemies that we seem to like so much? Why do we like seeing them getting killed? It seems to make no intellectual sense. As a writer I am told over and over to fully-flesh my antagonists, yet fiction is rife with cartoon baddies Wilhelm-screaming and falling off roofs.

The enemy who has his face hidden is an enemy who has been dehumanized. Humans have instinctive reactions to seeing each other's faces. When the face is shrouded, those instincts are deadened.

This has two major effects. Fistly, for audiences, we cease to identify with the enemy. It just won't do for viewers to sympathetically exclaim, "Han Solo, you brute! That poor Stormtrooper! Did you think about his family when you blasted him?" This allows heroes to plow through hundreds of faceless foes, letting audiences worry only about the protagonist's peril.

The second major effect is a by-product of the first. When we have our sympathetic reactions to death impaired, it affects censors like the MPAA and the ESRB less. Dead Stormtroopers make for PG-ratings in theatres, at worst Teen ratings in video games. By putting a mask on your baddies, you are making your story available to millions of bloodthirsty children.

Okay, so that explains why creators select the Faceless Enemy. But why do audiences find them compelling? I've mentioned that the mask dehumanizes them, but with dehumanization also comes fear. The mask represents mystery and fear of the unknown. The emotions of a Faceless Enemy cannot be read except by body language, making their thoughts a mystery as well. With the identity hidden, the Faceless Enemy becomes a menacing stranger. Menacing strangers are a powerful human fear, as evidenced by the amount of media attention random murders, child-snatchers and serial killers receive. Lastly, when the Faceless Enemy serves a political entity such as an empire or terrorist group, he becomes a symbol of powerful conformity that has obliterated his identity, quietly whispering to the viewer, "This could happen to you, too."

In short, as a literary device, Faceless Enemies can inspire terror in the human heart. By including them as followers of your antagonist, (who should remain fully-fleshed), they significantly enhance his/her fear factor. Are you still worried about allowing poorly-fleshed characters into your work of fiction? Remember that the way to be a bore is to say everything. Unless that gas-masked Nazi is going to play a significant role in your plot, we don't want to know about him. We don't even want to know that his name is Hauptfeldwebel Helmut von Pickelhube. Just let your protagonist murder him and move on with the plot.

Believe it or not, this diatribe has real-life application. In his book, On Killing: The Psychological Cost of Learning to Kill in War and Society, Lt. Col. Dave Grossman showcases the innate human resistance to killing other humans. Apparently, before the Korean war, only about 15% of soldiers actively tried to shoot their enemies. The rest helped wounded comerades, reloaded weapons, cowered in fear, ran around shouting like idiots or fired their weapons over the enemys' heads. Generals like Carl von Clausewitz were confounded as to why, when a Prussian infantry formation fired a musket volley at a barn, all the shots hit, whereas when the same formation fired at an advancing line of tightly-packed infantry, only one or two enemies dropped. The closer you get to your enemy, the harder it is to overcome the urge not to kill him. A pilot can easily fire a torpedo at a battleship and sink it, killing who-knows-how-many soldiers, but the same man may freeze and be unable to bayonet one enemy in close-combat.

Modern training and drilling techniques have been introduced to overcome the resistance to kill. It also helps to have a superior officer yelling at you to kill. The American military also makes extensive use explosives and snipers, which kill at a distance rather than forcing up-close confrontation.

But by far the most time-honoured tradition of getting soldiers to kill is the art of dehumanization. From the made-up stories of the barbarious Hun mutilating innocent Belgians in World War I to the bullshit story about Iraqis tossing babies out of incubators, governments have been using real and fake propeganda to encourage soldiers to kill. If a soldier can view the enemy as degenerate subhumans, he/she can pull the trigger with more ease. 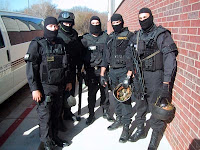 Considering what Dave Grossman has to say and how audiences react to fictional Faceless Enemies, it might be worth examining the wisdom of hiding the face. Camouflage, anonymity, night vision and protection from chemicals have their uses. But by hiding the face, these soldiers and police are dehumanizing themselves and becoming more attractive targets. In situations where the enemy has no modern military training, this is especially important. An untrained fighter is more likely to shoot a menacing mask than a real person with a human face.

If this is something that soldiers and commanders consider before they enter combat, that's good. I'm glad to hear it. But otherwise, it's something to think about. Obviously there will be other tactical considerations in any engagement, but if I were a soldier (and I'm not), I'd think twice about putting on that balaclava.