Wolverine: So tradin' liberty for safety's what's passin' for "sensible" these days? 'Cause I seemed to think the motto of America -- and I'm Canadian, so that might be why I'm confused -- used to be, "Give me liberty or Give me Death".
Maria Hill, Director of S.H.I.E.L.D.: Are all Canadians this judgmental?
Wolverine: When it comes to America, pretty much.

Marvel Comics is known for its flawed heroes, the moral ambiguity of its stories and its dark settings. Amongst its darkest settings in recent memory is its Civil War series, Marvel's comment on the erosion of civil liberties in America. I have now read ten of the Civil War graphic novels and feel I can offer some thoughts. 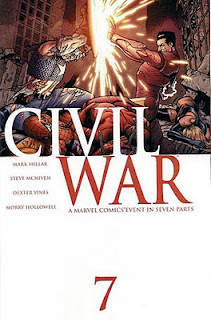 Like all things wrong with the modern world, it starts with a reality TV show. The New Warriors and their leader Speedball are having trouble finding supervillains to fight on national television. Desperate for ratings, they attack a group of fugitive villains that are out of their league. Amongst the fugitives is Nitro, a man with the ability to cause explosions around him, who promptly asplodes the New Warriors and half of Stamford, Connecticut in the process. 612 people, including 60 children are killed.

As always happens when kids get killed, everybody overreacts. Congress passes the Superhero Registration Act, requiring all super-powered heroes to register their identities with the government, undergo training and become Federal Marshals. All those who refuse to register will be imprisioned. Leading the charge is Tony Stark (Iron Man), who sees the need to enforce accountability amongst a group of people who are essentially vigilantes with the ability to kill hundreds of people. Interestingly, the Registration Act's greatest foe is Captain America. You see, he grew up before World War II and is attached to an America which no longer exists. He sees the Act as yet another step toward an American police state and rallies unregistered heroes around him. The pro-and-anti-reg heroes resolve their differences the only way know how: shooting each other and killing innocent people in the crossfire.

The message of Civil War is the perfect comic-book product of the George Bush era: Which do you value more, security or liberty? America's prison population swells. Heroes put their loved ones in danger when the government unmasks their secret identities. The government uses villains to arrest "the good guys". Heroes are held as "unregistered combatants" in "undisclosed locations" in North America. All of this is done with the willing participation of the citizens and representatives of the United States.

Along the way, all the heroes torture themselves. The Pro-registration heroes suffer from the guilt of locking their former friends in jail and the severity of measures which must be taken to maintain order. The Anti-registration heroes, outnumbered and hunted, find themselves assaulting police officers, destroying property and hurting bystanders. Everybody believes what they are doing is right but everybody also questions if what they are doing is right.

Such are the moral complexities of Civil War, and Marvel Comics continues its reputation for cerebral writing. However, Marvel also has another reputation, one that it shares with other comic publishers: comics can be kinda dumb. The Civil War series is very large and has room for both reputations. The quality of each volume varies significantly in both writing in art. Here is a quick guideline for what are must-reads and things to avoid. This list is not all-inclusive as I haven't been able to get a hold of all the titles. If you don't see a volume listed here, it's because it was either mediocre/okay or I haven't read it. 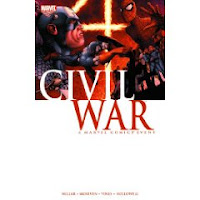 This volume presents the basic events of the Civil War as Iron Man and Captain America trade insults and blows. It has all the major themes of the series, all the necessary action. Yet, something is missing. The book has too many heroes to concentrate properly on their trials, too many climactic events to show. Overall, it felt rushed. As well, the art can be confusing during some fight scenes. Overall, it's a mediocre volume. Unfortunately, it also essential to read if you want to understand what's happening in other volumes. I suggest you read it, prepare to be a bit underwhelmed and enjoy it when you can, then move onto better volumes.
3 of our former friends locked in the Negative Zone Prison out of 5 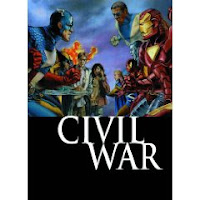 Frontline is essentially a more in-depth examination of the Civil War, providing the detail that is missing from the main volume. It is told from the perspective of three people: Ben Urich, a reporter from conservative fish-wrap The Daily Bugle, Sally Floyd, a reporter from liberal rag The Alternative, and Robby Baldwin, aka Speedball, the hero who survives the Stamford explosion only to become the most hated man in America. The two reporters learn more about the new world order as they grow closer while Speedball deals with his guilt for his involvement at Stamford. I have nothing bad to say about these books. They are perfect in their own way. They have all the moral ambiguity I love, but perhaps not as much fighting as comic readers would expect. I rarely cry while reading, but I actually found myself becoming bleary-eyed at a few moments, something unheard of while I've read graphic novels. There is a third book in the series which I am trying to get a hold of, but honestly, the story wraps up nicely in these first two volumes.
4 1/2 attempted assassinations out of 5 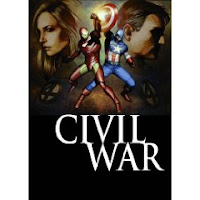 The Fantastic Four are riven when Mr Fantastic follows his utilitarian, pro-registration agenda at the expense of the morals of his wife, Invisible Woman. This volume starts okay and has an amusing digression when The Thing moves to France and has a refreshingly old-fashioned adventure helping his new French friends foil a dastardly plot to undermine Paris. However, the story soon meanders and finally halts in an unwarranted Fantastic Four 45th Anniversary Special. 45th? Really? What is that, the corrugated chip-board anniversary? If the 45th anniversary means the Fantastic Four are going to ruin a decent graphic novel, what are they going to do on the 50th? Invade classic works of literature and ruin them? In any case, the anniversary special contains lots of in-jokes, pointless shatterings of the fourth wall and yet another lame appearance by Stan Lee. Stew-pid.
1 times clobberin' out of 5 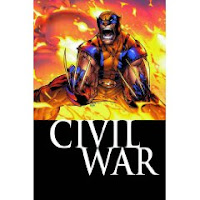 In the aftermath of Stamford, Wolverine sets out on a lonely quest to find Nitro, the villain who killed 612 people. As he relentlessly tracks Nitro, he pisses off S.H.I.E.L.D., the Atlanteans, corporate America and even his fellow X-Men. The writer apparently wrote a few episodes of television's C.S.I. and it shows. Normally, C.S.I. zippy one-liners piss me off, but when they're coming out of Wolverine's mouth, they're hilarious. Wolverine rampages around, making enemies, maiming people, occasionally getting the shit kicked out of him but always returning to brutally right wrongs. The art is over-the-top, cartoony and yet gritty, enhancing the fun atmosphere of the book. It's great.
4 1/2 sneaky back-attacks out of 5 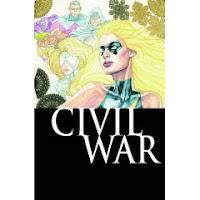 Just so you know, most of this volume concerns events that don't have anything to do with the Civil War. There's a story that starts promisingly with single mom Arachne running from the government while trying to fetch her child so they can flee to Canada. It has promise, but abruptly stops when another version of Ms. Marvel appears from a parallel dimension and they fight. Then some other thing happens with some stuff happens and... I dunno. It was kinda stupid. Maybe it has merit on its own, but for Chrissake don't cram a bunch of material into a book called "Civil War" that has nothing to do with the Civil War. Cheap assholes.
1 fight that could have been avoided if everybody just talked to each other out of 5

That's about it. The Marvel Civil War is rewarding and profound if you look in the right places and get through the mediocre opening volume. The best parts of this series were worth the slog through the disappointing parts. If you decide to investigate this series, I hope these reviews will be helpful. I'll devote a little more time in the future to some of the volumes that I missed, but for now I'm hungering for some books with fewer pictures.