It's the simple tale of a man who falls in love with a woman while he's impersonating a woman. And she thinks he's a lesbian. And he attracts every old man he meets. And his current girlfriend begins to suspect that he's gay. Okay, maybe it's not that simple. 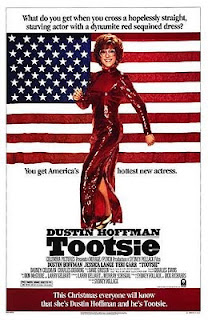 Cross-dressing stories are familiar to us all. They were well-trodden territory for writers in the English Renaissance and thereafter. They were probably popular before too, but I wouldn't know because I haven't investigated. What Tootsie has to offer that was not-so-familiar in 1982 was the added complication of sexual-orientation ambiguity. When starving actor Michael Dorsey cross-dresses to get a female part on a soap opera, it is purely for monetary reasons. He finds himself in a variety of sexually uncomfortable mixups.

It's pretty funny. The dialogue is well-written. Perhaps it's not a masterpiece of American cinema as the AFI claims, but it's still worth watching.

It just wouldn't be a review by me if I didn't mention something about the music, would it? See, in Tootsie there's this song called, "It Might Be You" that pops up during a montage and the credits. It's a simple number with male voice (Stephen Bishop) and electric piano. It's also awful. You can imagine my surprise when I discovered that this piece a' shit was nominated for Best Original Song in the Academy Awards and spent eight weeks in the Top 40.

I'd like to go on a rant about the 80's and the strange cultural warping of taste that occurred. What were we thinking, honestly? Why did we think those primitive synthesizers and electric pianos sounded cool? Sadly, this digression must be ranted another time because I have not thought it through fully.