Lament for the Socialist Dream

A Facebook group I belong to recently posted an old recording I heard years ago on LP of Saskatchewan Premier Tommy Douglas reading a poem by Robert Burns, "Is There for Honest Poverty", otherwise known as "A Man's a Man for a' that". I was overjoyed and posted it to my profile. Hearing the final lines of that poem stirred something within me that has long laid in torpor.

Ah, the dream of socialism. It's a dream that began generations ago and was borne by millions. At its core is the simple idea that we, as a society, can afford to feed, clothe, house and provide medical care for all our citizens. Free from want, men will not war. Men and women died for the socialist dream on gallows, in prison cells, and in cobbled streets.

The dream moved me when I was young. I was born in Saskatchewan, where the socialist dream flowered before my birth, an example to all the world. For it was here that the Cooperative Commonwealth Federation evicted a pack of corrupt, filthy Liberals from government and erected the beacon of democratic socialism in North America. Tommy Douglas, a little fellow with a big idea, reigned as premier for nineteen years. Amongst his accomplishments: North America's first government arts funding agency, the publicly-funded introduction of electricity, plumbing and telephone to rural Saskatchewan, and of course, the program that changed the face of Canada, Medicare. Douglas was incorruptable, fair and compassionate.

In my lifetime I have watched the flower bed of socialism wither. It was uprooted by corporations and blighted from within. It's heartbreaking. "Socialism" is now a dirty word in North America. Every day corporations and the rich continue their relentless propeganda, hammering on social programs worldwide. Every day community-minded people surrender the dream. Every day the friends of the rich in government bankrupt public coffers by lowering taxes and spending irresponsibly on business buddies, then turn around and say, "Too bad. I guess we can't afford this ______ program, heh heh heh". I cannot bear to watch the news anymore.

One of the most effective arguments which conservatives bring to bear against socialism is "realism". We are told that, "we can't afford that". Examples are shown to us of people who cheat the social safety net. We are told that big government saps strength from the economy, are terrified that a tax hike will cause a plant closure or frighten a potential investor out of town or out of the country. In an era of extremely mobile corporations, it makes no sense to raise taxes which will drive industry into asian export processing zones. I hear all these things and know that they have a point. Yet I still believe in the dream.

For all of its allure, the socialist dream is truly a dream. All dreamers must wake to reality. I believe that warring is programmed into humankind and we will find ways to battle even if we have full bellies. I also believe that people will steal and cheat each other no matter the roof over our heads. These are genetic realities.

Yet, while the socialist dream can never be achieved, we can certainly get close. It is still possible to feed, clothe, house and care for all those who need or want it. While alleviating poverty will not prevent all conflicts or injustices between humankind, it will at least stop people from wronging each other to survive. It's worth it to pay extra tax to make sure the guy operating heavy equipment near your home isn't going to drop a load of ingots on you by accident because he's distracted by a toothache. It's worth it to keep that guy begging in front of the liquor store out of your face. It's worth it to have children going to school with full stomachs so they can actually learn. A world where no man fears for their survival is truly free.

How could poverty be eliminated worldwide? Is it possible? If so, we, as a society, and particularily our rich folks, must be willing to sacrifice some cash. We must look after not just ourselves and our families or even our neighbors, but complete strangers. We must make peace with that most dirty of words, "tax".

Taxation is at the heart of any socialist society. It's annoying. We hate it. Yet without it, there is no communal safety, no government, only anarchy.

In the industrial age, socialism could work because corporations and the rich were not as mobile. This was because, firstly, they didn't have such kickass transportation technology. It was just harder to go anywhere, harder to ship products around the world. Another thing that kept money in place was nationalism. Many industrialists were loyal to their country of origin and opened factories in America because they themselves were American. Nowadays, corporations seem to have little loyalty to place.

Nowadays, socialism can't work. Why? It requires money. We've all heard the stastic that 95% of the wealth is held by 5% of the population. Therefore, you have to get that 5% to cough up some of their dough. And they don't want to do it. There are plenty of historical examples of societies that had no social security net, where charity from the rich was the only way alleviate poverty (medieval Europe, early industrial England), and in those societies it really sucked to be poor. Charity is not enough. Taxation is necessary.

You just can't pin down big money anymore. If you raise taxes on the rich, off they go with their fortunes to Bermuda. If you raise corporate taxes, the factories close and it's off to China. Tariffs on international trade really are counter-productive and amount to a flat tax, rather than a tax which targets only the rich. When socialist parties have been elected to government recently, they invariably fail when the wealth of their constituencies begins to melt away. They are doomed to failure.

Things would be groovy if the rich would just stay put, accept the fact that they can afford to pay more taxes than everybody else and pony up like responsible citizens. Yeah right.

As long as we're in the realm of speculative fiction, let's speculate some more. What's the only way to pin down these rich guys? You have to have a government that can tax them wherever they flee. In short, Earth must have one world government.

Uh oh. It's the capitalist's nightmare. It's what US politicians have been warning us about all along. For decades, paranoid Americans have been terrified that men in baby-blue UN uniforms would parachute into their communities and send them to toil in salt mines. This sounds ridiculous, but they have a point.

You see, over the last hundred years or so, many persons have waved the red flag, yet once they entered power, established crushing, horrifying tyrannies that murdered their citizens. The Soviet Union comes to mind, oh yeah, and Red China and Cambodia and North Korea, etc. The sad fact is that the beacons of democratic socialism like CCF Saskatchewan are historically outnumbered and out-populated by authoritarian socialist regimes that make life miserable for their citizens. If I have a choice between Stephen Harper's lame, corrupt, conservative Canadian government and Stalin's Soviet Union, thanks, but I'm going to take Canada, flawed though it be, socialist dream be damned.

Socialism seems to attract assholes, though I suppose any sort of power attracts assholes. But any government strong enough to wrest wealth from the hands of its most powerful citizens is also strong enough to murder people and choose not to hold elections. That strength in the hands of power-hungry assholes always equals bad.

Okay. So. To cure world poverty you must have a world government. And it must be a democracy or a republic with checks on its military and police. And then the majority of earth's citizens would have to agree to elect socialist governments for long enough to dismantle capitalism as we know it. Only then can the socialist dream be achieved. Easy, right?

I'm going to go ahead and say that the day the socialist dream comes true is a long time in the future. To achieve it, some enterprising country or corporation is going to have to conquer earth. This would be a planet-endangering, socio/political upheaval of massive scale, a World War III. The amount of human blood that would be spilled in such a conflict could flood the Saskatchewan river valley. And even then, the forces of entropy would work on this enormous government, no matter how good its intentions, and it would inevitably become corrupt and a danger to its own citizens. The socialist dream could, if only for a moment, be reality but at a horrible cost.

I guess it's not worth it. The Dream will never be achieved in my lifetime, probably never in the lifetimes of my children or grandchildren. This is the solstace of capitalism. We idealists must watch the rich chip away at the victories of our grandparents. I know in my heart that the day is coming soon when they will take Medicare from us. If they don't win they will keep trying until they do. On that day I'll weep at the injustice of it.

So what's to be done? I suppose I just have to take care of my own, be charitable when I can, and be nice to everybody I meet and vote. Perhaps some catastrophe will rend the machinery of capitalism someday, like the end of oil or global warming or zombie apocalypse or the like. On that day, grouchy old guys like me will be around to help society dust itself off and say, "I told you so."

Perhaps somebody ought to ask the writers of Star Trek how the United Federation of Planets gets formed in the future. 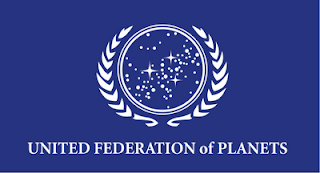