Review of "Flashman in the Great Game" by George MacDonald Fraser

Harry Paget Flashman is the greatest hero of the British Empire. He gained respectful fame in the First Anglo-Afghan War, the Sikh Wars, the Crimean War, and the American Civil War. At the end of his distinguished career, he is a Knight of the Bath, a General, and a Victoria Cross recipient. He also happens to be a spineless, chauvenistic cad who flees from battle and into famous women's beds. Flashman in the Great Game is the fifth installment of the Flashman Papers, the memoir of the famous Englishman, which were "discovered" by writer George MacDonald Fraser. 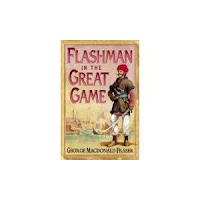 On this occasion, the hapless Flashy is bundled off to India by Prime Minister Palmerston to investigate rumours of discontent amongst the sepoys. Flashman's attempts to lay low and stay out of trouble are menaced by the Russian spy Count Ignatieff, who pursues him with assassins, spreading discontent in his wake. As is usual for Flashman, he appears in every important conflict in the coming Indian Mutiny, desperately trying to stay alive and flee. He falls in love with Rani Lakshmibai along the way and by the end of the book he has nearly been shot, stabbed, starved to death, eaten by crocodiles and blown out of a cannon.

It is my favourite Flashman adventure since the first book. This is partly because during the middle bits Flashman is forced to masquerade as a Pashtun Warrior in the Native Cavalry and the readers are offered a fascinating view of the reasons for the Indian Mutiny. In the N.I. barracks, rumours abound that the British are trying to defile the Muslims and break the castes of the Hindus. The British East India Company foolishly allows Christian chaplains to preach at the sepoys during parade, deepening suspicions. Then a rumour emerges that a new rifle cartridge being issued to the sepoys is greased with a mixture of pork and beef fat. Such a cartridge, when bitten to load a rifle, would defile the loader's religion. Interesting stuff.

Another satisfying angle of the book is that, more than any other Flashy adventure so far, bad things happen to Flashman consistently. Harry Flashman really is not a very nice person. So when awful things happen to him it's enormously gratifying.

Yet, there is an angle to Flashman's character that is curious. As bad as he is, the reader is forced to identify with him as the protagonist. He does things that are repellent, but every man dreams about, ie. hops into bed with any woman he wants. Sometimes Flashman even seems admirable, as he is in fact a very clever person, assuming a pretty woman isn't foiling him. One scene in this book in particular will stay with me. I'll paraphrase it as best I can:

A pious former aquaintance accosts Flashman on the eve of a hopeless battle. He confesses that he has been angry since Flashy tossed an unrequited love out the back of a moving sled in Russia (see Flashman at the Charge) and begs for forgiveness. Flashman refuses on principle. This aquaintence persists, saying he should give forgiveness for the good of his soul. At that, Flashman berates him, calling him a hypocrite. "Don't pretend," Flashman says, "that it would be for anyone's good but your own. As for your true love, I had her four or five times a week. There, I've made it easy for you to not worry about my forgiveness. Now bugger off." Classic. 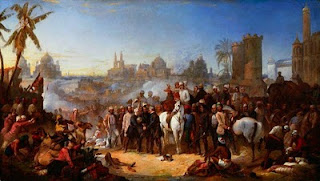 Flashman in the Great Game is yet another excellent book in the Flashman series. The quality of these books is astounding. They are extensively entertaining and researched. Normally one can expect a decline in quality in a series as the author becomes complacent, but this one is still going strong. To have a book so close to perfection this late in the series is unheard-of.

If you haven't sampled Flashy yet, go out and purchase the first volume, Flashman, and let the adventure begin.
5 ladies bedded out of 5