The Visionary and the Administrator

It's been a couple weeks since I wrote here. I've been busy: I went to Vancouver and, when I returned, hosted a house concert for Suzie Vinnick. The concert was awesome but only four people showed and I felt like a heel. 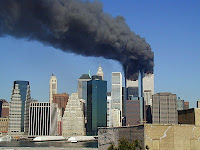 I've done some thinking about the "everything is getting worse" mentality from which I sometimes suffer. It's a mindset that is very destructive to day-to-day morale, motivation, and even self-esteem. I inhabited this place for a long time in my life, particularly in the years immediately following the attacks on the World Trade Center in 2001. If one looks, one can see the world he knows crumbling, enemies lurking everywhere and apathy.

I've done much to banish "everything is getting worse" by not watching television. I get my news from a little Google sidebar and avoid the stuff I don't want to see. I have also stopped reading activist websites, which honestly just make me angry at the world and then make me feel powerless. As a result of study of The Principia Discordia, I've been able to see the world not as crumbling, but as changing, and make my peace with change.

However, I've done some serious thinking about "everything is getting worse" lately. Not because I'm thinking of subscribing to its ideals again, but to see if it has any truth at all. After some deep thought, I've created this grandiose statement:

"It is the nature of our society for products to get worse."

If you would, I would like you to think of a brand-name food item that has been around for several decades (assuming you're old enough). It can come off a grocery shelf or be served in a restaurant. Close your eyes, visualize it. Think about how it looks, how it tastes, it smells, how it is packaged. Now think about how it used to be. Visualize it in the same way. Compare. Was the older version of this food product bigger? Did the package contain less air? Did it taste better? Did it cost less? Chances are that you can answer yes to at least one of these questions, probably more. Think of another food item and repeat the process.

Sure, currency inflation explains why it costs more, but from the perspective of the average consumer, what else is inflation but the manifestation of everything getting worse? There is some bias, of course, in the question of "did it taste better?", because when you were younger you had more taste buds and everything tasted better. But in the question of taste, consider how the major soft-drink manufacturers switched from cane sugar to corn syrup as a sweetener in the 80s. Putting questions of obesity aside, how did that affect the flavour of our pop?

Don't try to deny it. In our society, once a product or idea is marketed, the forces of capitalism begin their work. Those who make their living from it seek to make it cheaper to produce, smaller and tagged with a higher retail price. It is a slow process, usually imperceptible with the passing of years. The McDonald's cheeseburger of today is a very different food item than the ten-cent burger of 1937. Specifically, it's smaller, more expensive, and made with less-wholesome but cheaper products.

It's not just food items, either. It's all products and services. It's in entertainment: the sequel is always worse than the original. In workplaces all over the world, people are getting laid-off while the workload stays the same, the remaining employees tacitly asked to work overtime without pay and openly asked to "do more with less". It's not just free-market services either. The quality of service from the Canadian government, for instance, from the NFB to the CBC to Medicare to the Canada Pension Plan to the Canada Council, it's all worse.

Every good product and innovative service has two metaphorical figures locked in loving embrace and struggle: the Visionary and the Administrator.

The Administrator is a facilitator. He has common sense, a grasp of reality and the ability to think critically about what is important. The Administrator's desire is to draw black ink. At his best, the Administrator helps Visionaries and employees realize their maximum potential, gathers and manages resources wisely and makes life easier. At his worst, he destroys creativity, fears change, overworks employees and makes policy that benefits Administrators.

It is a never-ending cycle. It starts with an idea, dreamed by a Visionary. An idea is just an idea and doesn't become reality until the Visionary seeks help from an Administrator. The Administrator helps the Visionary see what is realistic for the idea, provides creative limitation, finds funding and manages the workforce. The idea expands and grows to its full potential.

Then something happens. At some point, control of the product shifts from the Visionary to the Administrator. Either the Visionary moves to a new product, or dies or becomes complacent. The retail price goes up as the brand is established. The budget shrinks. The product changes in tiny ways. The workforce used to create and support it vapourizes with layoffs. The Administrator is rewarded by bigger payoff, but the product suffers. The only way to return the product to its former glory is the actions of another Visionary, but at this point, Administrators fear jeopardizing their holdings and resist any new changes. When the product suffers, so does the public.

It's just how it goes. The only things that will motivate Administrators to reverse the effects of their product-destroying policies are the actions of hostile Visionaries that threaten their holdings. It explains why dynamic industries, like those related to techology breakthroughs, are always in healthy competition and have good products: today's computers are decidedly better than those I grew up with. However, beef technology has not improved and my Whopper Jr. is worse than the one I ate fifteen years ago.

As we drift through life, it is very easy to see how great ideas are ruined every day and fixate on it. Some guy died waiting for publicly-funded cancer treatment. The Star Wars prequels sucked. My Pepsi doesn't taste like it did when I plucked it from my Grandad's bar fridge when I was a kid. I can't buy O'Ryan's Sour Cream and Onion chips anymore. Canada's international reputation is besmirched, diminished from the days when Lester B. Pearson blah blah blah everything is getting worse blah blah blah.

To thoroughly enjoy yourself in this society, you must have an appreciation for the new and marvel and must not cling to that which is dying and changing for the worse. Enjoy them while they're still good. Get lost in a video game sometime and marvel at the graphics before another game trumps them. If Burger King fails to offer you a good Whopper Jr., seek the burger that some Visionary somewhere else is offering and do not shed a tear for the decline of your favourite meal. Vote out the government of tired old men. Hail Eris.

Above all, you must not be afraid.