My Conversation with Jack Layton

In the winter of ought two and ought three, in a small, dirty campus room lit by buzzing fluorescent lights, I met Jack Layton. Before me were rather uninspiring candidates who wished to become leader of the New Democratic Party. Behind me was a depressing crowd scarcely more numerous than the candidates. It was cold outside and, indoors, the meeting whispered bleakness. You could not be in that room and escape the feeling that you were alone, that your voice didn't matter, and the struggle for human right and human gain was over. 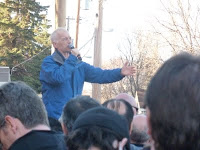 That is, until candidate Jack Layton spoke. I had known previously that he was a professor and notoriously green, so I had been canvassing for him. However, it was only until I saw him speak live that I was inspired. When he spoke, he banished all the cold and hopelessness of that unhappy gathering. He made me believe that impossible things could be accomplished.

After the meeting, he sat at my table and asked my small group of friends what most concerned us. I told him that nationalism was inhibiting governments. He adopted a serious expression and asked, "What do you mean?" I told him that multinational corporations don't care about nations, that they move money about the globe to avoid taxes and exploit legal loopholes, while national governments can only disjointedly patrol their own borders: The only way to have true democratic socialism is a world government (see this post), but nationalism was standing in the way.

He thought for a moment, but an aide tapped him on the shoulder. Jack said, "This is interesting. I have to go for a moment but I'll be back to continue this." He left our table. Unfortunately, some ridiculous incident where my girlfriend accidentally kissed Pierre Ducasse on the mouth occupied my attention and we left the meeting in the midst of a minor quarrel. It was one of those things that only a young person could get upset about, but it seemed really important at the time. My conversation with Jack Layton remained unresolved.

For the next eight years, after Jack's successful leadership campaign concluded, he was mostly ignored by the Canadian public. Somehow, his speeches and stage presence seemed dulled. I'm not sure if this was a deliberate effort on the part of his PR people to make him seem more boring and middle-of-the-road, a time-honoured Canadian path to greatness. If that's so, it didn't work for Jack. He seemed to fade into the background, noticed only when people mocked his moustache.

The election of 2011 began similarly to the other elections. The media continued to cast the election as a two-way race between the Liberals and Conservatives with the other parties as minor distractions. But this year was different. Jack, returning from a battle with cancer and a broken hip, stormed into the public consciousness. He shed his boring persona and became a champion who fights with a grin on his face, damn the adversity. When I went to see him for his public appearance at Station 20 in Saskatoon, the atmosphere of hopelessness in that bleak campus room so many years ago was gone, replaced by infectious optimism. I couldn't get near the man, let alone have a discussion with him about nationalism. Again my conversation was unresolved.

I don't know what it was that made his last year on earth different from his previous years in federal politics. Perhaps his brush with death filled him with exuberance for life that captured the public's heart. Perhaps the lingering threat of cancer pushed him to live every campaign day to its fullest.

As a lesson for us all, I could insert some cliche along the lines of, "Live every day like it's your last" here, but I don't think it's necessary. His life speaks for itself. He accomplished the seemingly-impossible, just as he promised. In an era where opportunistic so-called-capitalism is waxing, he led an NDP surge in Quebec, of all places, and oversaw the first federal democratic socialist opposition. His dream of a kinder, cleverer Canada has never seemed nearer.

Thank you, Jack, for ever-sowing the seeds of hope in my jaded heart.