After reading Julian this spring, my mind was primed for more Gore Vidal. As I described in this review, Julian is easily one of the best books I have ever read. So on the way to rescue the wife from a root canal one day, I stopped into the White Cat Bookstore and said, "Give me all the Gore Vidal you have". I had two options, and bought them both. However, I chose the book Two Sisters because I opened the cover and the first sentence I read went, "Despite my protests, Marietta revealed her breasts." 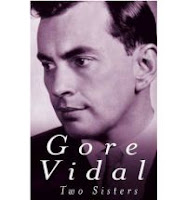 I say "book", because Two Sisters is part novel, part screenplay and part memoir. The memoir bits are the sections where he reminisces and bitches about days past and present. The novel bits are the parts he makes up, and the border between the fiction and nonfiction is never clear. The screenplay is a relevant but amateur script about Herostratus, the ancient Greek arsonist who burns the temple of Diana to one-up his sisters. The three parts intertwine and gradually Vidal reveals the story of a love triangle between himself and twins Eric and Erika.

I can see how somebody could really hate this book. The structure is unconventional and some might find it jarring. The protagonist, Gore Vidal himself, could be construed as disagreeable. He's two-faced, petty, dispassionate and self-interested. He constantly snipes other authors. The universe in which Vidal lives is hedonistic, affluent and decadent. Some might see the antics as disgusting.

Yet I did not hate this book. I liked it. If one views the book with certain amount of distance, it becomes hilarious. It seems to me as though the Gore Vidal of Two Sisters is a self-parody. Therein is the key to liking this book. While Gore Vidal never winks at his audience to tell us that he's not really that bad, I'm willing to risk being wrong and say he's not the awful person he portrays. Even if the parody touches truths that are too close to reality, at least they're funny.

This book is full of quotables. I'm terrible at memorizing quotes, so I won't remember a single one. But Vidal's use of phrase had me constantly chuckling. He ranges late 1960's culture and brings home a variety of anecdotes and humourous observations on which the reader can feast. The world was changing as television and movies humbled the novel and Vidal has many things to say, sad and eloquent, as he watches his world of great literature dying.

This book was particularly significant for me. For this book is about the foolish pursuit of immortality. Vidal and his cast of characters in both his memoir and the screenplay all seek to be known after they have died. This has struck me hard at a time when I have ceased to be a young adult and I hold a baby in my arms.

Throughout my youth I wanted to create something or many somethings that would be admired in future generations, like a Beethoven Symphony. It's not just my desire, but that of just about every writer, artist, and composer. Here, in Two Sisters, Gore Vidal is watching literature collapse. His memory is failing him. He is just beginning to realize that the drive to create which he posessed in his youth will be destroyed just as certainly as his body will decay. Paraphrasing him, death comes for us all and the writer has a chance to take a shot at him. Some shots are better aimed, but death always wins.

Even during my lifetime, the yardstick by which I have judged immortality, Ludwig van Beethoven, has diminished. His music, and the means by which it is played, has grown fainter as interest and public money dry.

I have known that at some point I will have to challenge this idea of living through the art I leave behind. But I don't know if I'm ready to examine it yet. If I look inward and see that the reason why I write is empty, why write? I think before I'm ready for this philosophical leap, I'll have to actually be earning money through writing. That way I can say, "I write because it feeds the baby". That will certainly soften the blow. If I look too deeply now, that job at the 7-Eleven in Rosetown will be too appealing.

Enough about me. Two Sisters is certainly not for everybody, but it was certainly for me. I get the feeling that writers and literature enthusiasts will enjoy it more than others. The reviews that don't like it seem to dislike the ego of the Gore-on-steroids protagonist. For me, the book made me chuckle and sad by turns, and it is undeniably well-written.
4 bitchy writers complaining about each other out of 5
Posted by Cheruby at 1:14 PM