My Wonderful Band is Making me Crazy

The St. Patrick's Day season has ended. Traditionally, this is the busiest season for The Residuals. In fact, it's the reason The Residuals were originally formed: to satisfy the glut of demand for Irish music around March 17. After it's over, the band always enters a state of hibernation, emerging a month or two later to prepare for some isolated summer gig. 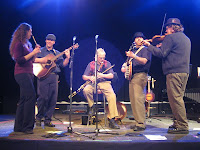 Always? Apparently not this time. This year we have a one-week hiatus and then we're back to work. We're hitting the studio again soon to continue recording our CD and we already have several gigs lined up for the rest of the year.

I love it. I am so proud of my band right now. While the Residuals have been around for over ten years, our current lineup of players - myself, Ted Leighton, Rick Kroener, Rob McInnis and Meaghan Haughian - has only been together for three. Those three years have been a series of incredible leaps in musicianship for we five. As their skills improved, I've listened and smiled. I've seen layers of stage fright shed from them like onion skin. I've watched as each of them gained the confidence and talent to experiment and "play" when they're playing.

Since December, we've been recording our as-yet unnamed CD and been busy with many gigs. As happy as I am to play with the Residuals, there is a pretty massive downside. As I discussed in this post, music inspires feelings in me that prayer inspires in others. Between the few hours I spend playing, I'm waiting to play.

The CD especially has me excited and I just can't wait to get into the studio. Yet I must wait. And I can't do anything about it. When I should be concentrating on the present, I'm instead anticipating the future. It sometimes makes me depressed.

I just can't get enough of playing with my band. I want more gigs, more CDs, more victories! Touring would be awesome! And yet there lies the other problem. Everybody but me has jobs. There's no way they could ever go pro without quitting them. Or I could frame them and get them fired for misconduct, but that's a series of devious plots for later.

For now, it seems the only answer is to just be less enthusiastic. I'm not sure that's possible. Many high-fives, fist-smashes, and hugs (where applicable) to my excellent Residuals for a best-ever St. Paddy's Day season!

ps. during band introductions, Ted called me "The Always-Distracting Jeremy Cook". I've never thought about it, but I guess I am kind of distracting. Is that good or bad?

pps. If you haven't already done so, Like our fanpage on Facebook.
Posted by Cheruby at 7:59 PM